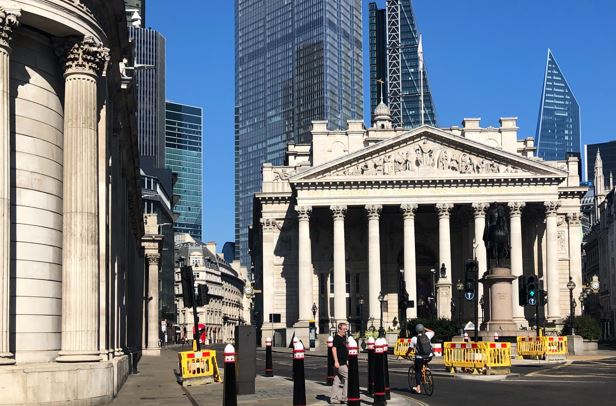 Deutsche Bank is hiring again. In his speech at the Barclays' Financial Services Conference earlier this month, head of the investment bank Mark Fedorcik said Deutsche is still re-engineering its fixed income trading business, but that it's also hiring "selectively" in areas like healthcare, TMT and financial sponsor coverage.

While Deutsche recruits carefully, however, another - smaller - German bank is expanding aggressively. Berenberg is growing across Europe and in the U.S.

"We have doubled our space in New York, moved into bigger premises in Paris, opened in Brussels, and we will be opening Stockholm early next year," says Laura Janssens, head of European equities at Berenberg. In London, Berenberg is also adding another floor to the four floors it currently occupies in the City. "We have floors three, four and five and the top floor of the Royal Exchange," says Janssens. "We are keeping all of that and adding the 7th floor too."

The expansion reflects increasing revenues and headcount. Janssens says Berenberg's UK business is expected to do £100m of revenues this year. The investment banking business, run by Chris Bowman with Matt Armitt and with Ben Wright co-heading advisory, now has 40 people up from 10 four years ago, and has priced eight IPOs already in 2020. Berenberg employs 130 equity researchers and 35 equity salespeople in London, who will soon sit together on the new seventh floor.

Further hires are planned to fill all new space. The New York research team, which is led by Rob Muir and currently comprises around 50 analysts is expected to double over time, says Janssens. A handful of additional investment bankers are being hired in the new offices, and Berenberg's graduate intake is up. "We have 40 grads arriving next month for their training and rotation. That’ll take us to around 500 people in London," Janssens says. "Next year we are going to expand the graduate scheme further to support our European banking teams and our new offices in Brussels and Stockholm."

Berenberg's enthusiasm for expansion looks like an affirmation of the post-pandemic return to the office. Already,  Janssens says around two thirds of its people are back at their desks. - The only thing holding them back is the current lack of space, she observes.

Photo by Klaudia Piaskowska on Unsplash