Torsten Slok is leaving Deutsche Bank. The top-ranked economist, who joined Deutsche from the OECD in 2005, is off to Apollo Global Management, the investment firm that's also been picking off juniors from other banks for its private equity team.

By all accounts, Slok's exit is a bit of a shock for DB. A Dane in New York, he'd worked for DB for 15 years since joining from the OECD in Paris in 2005. Slok's economics team was top-ranked by Institutional Investor for every year since 2010 and he was something of a celebrity influencer in the markets and on YouTube. He also appears to have done the work of several people, to the extent that Deutsche is sharing his work among three men instead of directly replacing him.

But was Slok so integral to DB that his exit afflicted the bank's share price? MAYBE. At least, journalist Holger Zschaepitz at Welt suggested this might be the case. 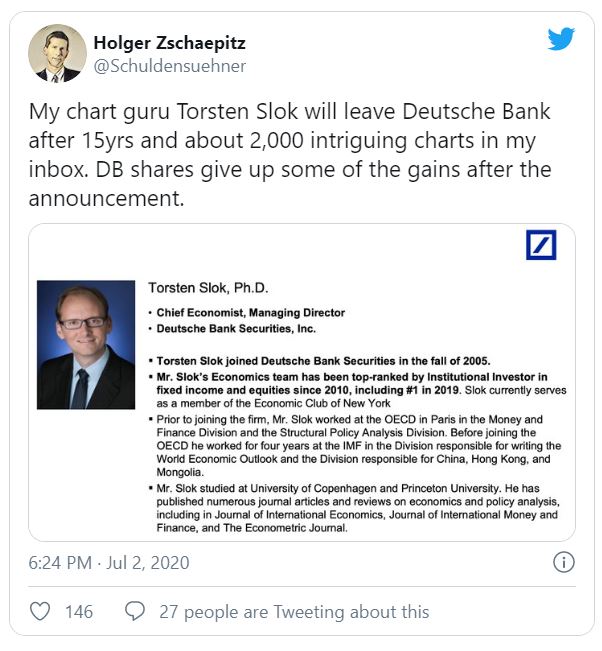 Was one economist really that important to Deutsche's wellbeing? DB's share price did indeed fall on Friday morning after Slok's exit was reported on Thursday evening.

The bank isn't sharing anything about its regrets on losing its star, but some insiders suggest Zschaepitz was simply indulging in some traditional Germanic humour reflecting the fact that he himself held Slok in high regard. This may be so, particularly as DB's share price has continued to fall this morning even after the market has come to terms with the fact that Deutsche won't be dispatching Slok's "intriguing charts" in future.